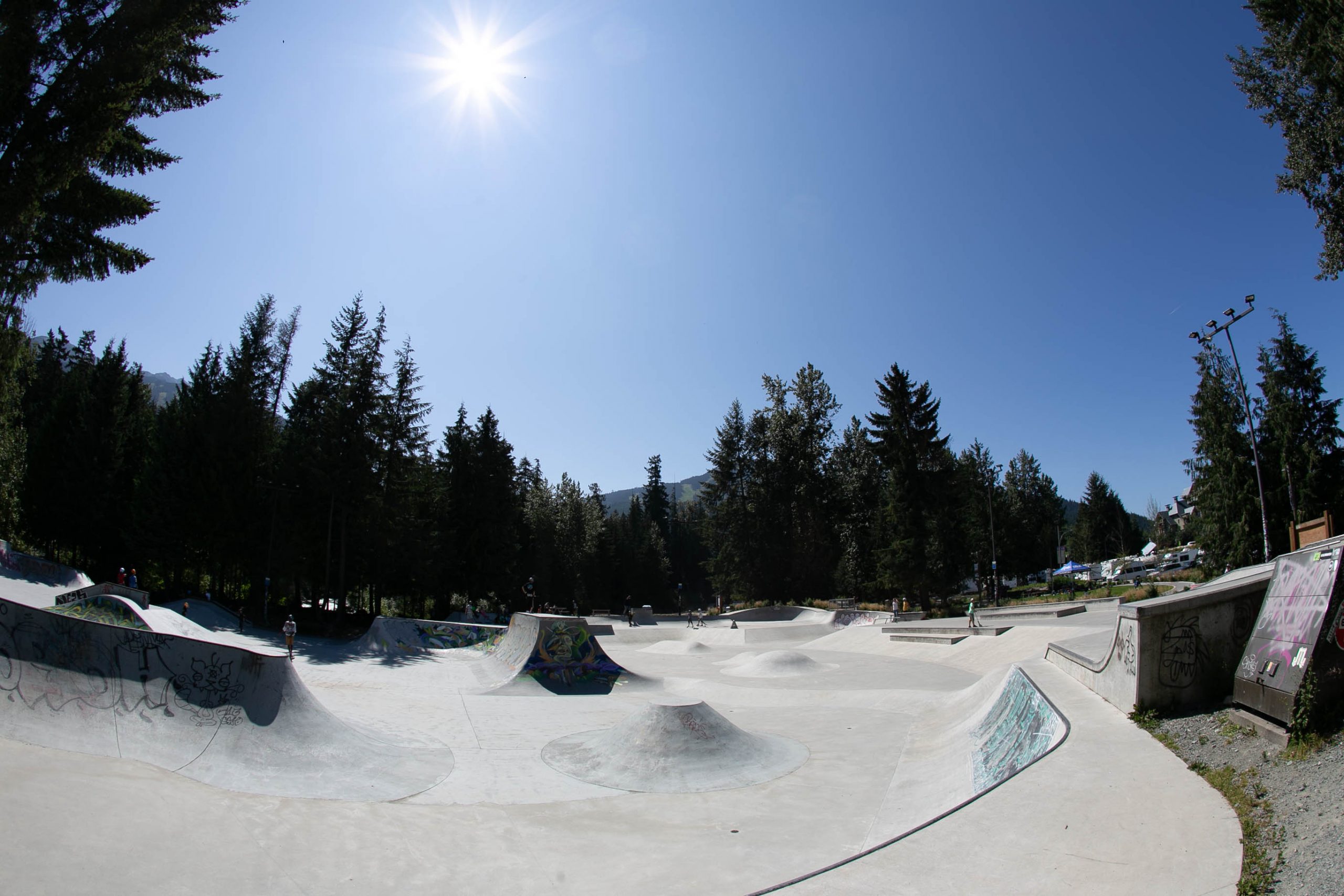 Whistler Skatepark is located at 4330 Blackcomb Way, Whistler, BC.

This skatepark is great for all levels of skateboard and scooter riders.

The Whistler skate park is rideable between April and November. It’s floodlit, and the lights stay on until 1 am, giving everybody plenty of time to skate.

The Whistler Skate Park has become the second largest in Canada with the total skate-able area of over 4,600 square metres (50,000 square feet).

The skatepark includes a brand new street section of rails, steps, and lips, while the snake bowl was resurfaced. You’ll also find a quarter-pipe, a bowl, a spine, and a central pyramid.

The park contains a serpentine run into a 6.5-metre diameter  “Snake Bowl”, a cherished and unique feature in North America. A second area contains a variety of ¼ pipes up to three metres high, a spine, volcano and central pyramid.

The expansion linked the two previous phases of the skate park and incorporates long flowy lines with multiple ledges and street-style elements that allow skaters to pump and flow for speed.

01. What is the youngest camper you allow to attend camp?

We start our programs at age 6.

02. How do you teach someone an action sport?

On the first day of camp we assess a camper’s skills. After we break into groups we run through a series of fundamental skills to make sure everyone in the group is on the same page. Then, we hone in on skills through demonstration by staff and repetition by our campers. We have found this to be a useful teaching method for skateboarding, biking, snowboarding and many other action sports. Many people have learned on their own after years of practice and hard falls: at Evolve, we’re confident we can accelerate the process through our methods of teaching – sometimes with a healthy number of falls!

03. What is the staff to camper ratio?

Evolve Camps for all sports have a 1:6 or 1:8 staff to camper ratio, ensuring that all campers are receiving sufficient attention and supervision.

04. Do campers have to participate in lessons?

Campers are not forced into camp lessons, but they are asked to participate. If the lesson is covering skills that the camper has already mastered they will be able to free ride. They will then receive a one on one lesson in the afternoon where they can work on a new skill.

05. How do you ensure safety at camp?

Extreme sports have their inherent risks – it’s hard to progress in these sports without taking on new challenges and exposing ourselves to greater risk. At Evolve, we try to limit exposure to injury by ensuring campers wear helmets and enough functional padding. Safety is also an integral part of the training and camp environment of Evolve. Our staff teach extreme sports within specific limits in a step by step method. We employ a “challenge by choice” philosophy, which means we never force anyone to do something they’re not comfortable doing. Instead we offer the challenge, its there for the taking.

Yes all campers need to bring a lunch. For some programs we offer hot lunch programs.

07. Your videos and pictures look cool, but everyone looks so professional. Will my child be doing all those crazy tricks?

We obviously try and showcase our best “talent” in these videos. If they are beginners, your child probably isn’t at the level of some of the shots in our video/photos. Maybe some day, but for now they are more at a developmental level. They will still be in Camp videos and/or Photographs taken at camp.

08. My child doesn’t know anybody at the camp. Will they make new friends?

Many campers come to camp not knowing anybody. On the first day of camp our staff ensure that all campers get to know each other. The best part about the program is that they are with the same “cabin” for the entire season, so close bonds are formed quickly.

09. My child has never participated in an action sport before, should they attend camp?

Yes! Whether they’re a learned snowboarder transitioning to skateboarding, or new to action sports in general, we have a wide range of skills levels at all of our camps. We pride ourselves on taking beginner campers and teaching them the skills they need to love their sport of choice. Nothing is more exciting than having a beginner camper show up on a Monday as a complete rookie and leave on a Friday like a veteran.

We have priced Evolve Camps as an affordable day camp program. You will find that the price of our camps are about the average price of quality day camps and programs.

11. Do I get a discount if I have another sibling/child enrolled in the camp?

Families with multiple campers (who are siblings with the same parents and residence) will receive the following discounts: $25 off the 2nd registration (does not apply for March break), $25 off the 3rd registration.

12. What if I miss the bus during one of the pick up times?

Our buses need to be on time in order to maximize our time at camp. That being said, our buses leave at the exact time that is on the schedule. If you miss the bus, it is your responsibility to drive your child up to camp or to the next stop nearest to you.

13. Can my child stay behind at the end of the day and catch a ride home with me?

Yes, All you need to do is notify our office that your child will not be coming home on the bus. We will provide instructions on how to do this.

If you have more questions, you can visit our frequently asked questions page. 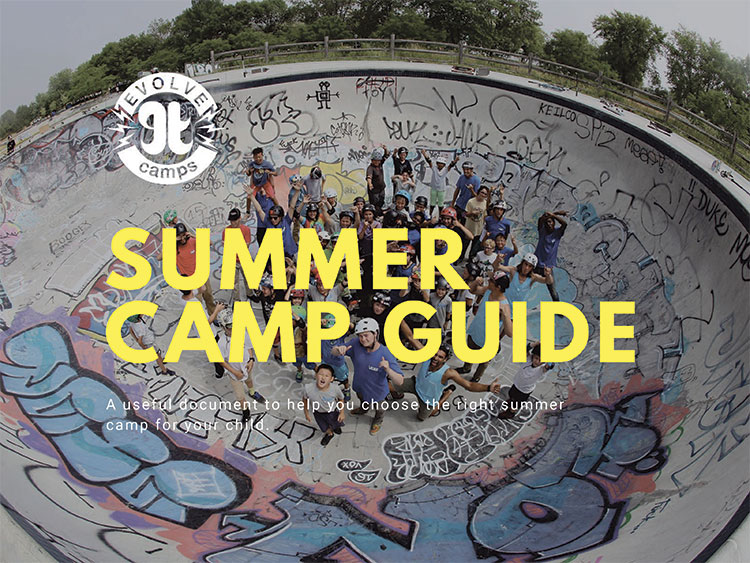 This guide will give you everything you need to know before attending one of our camps. 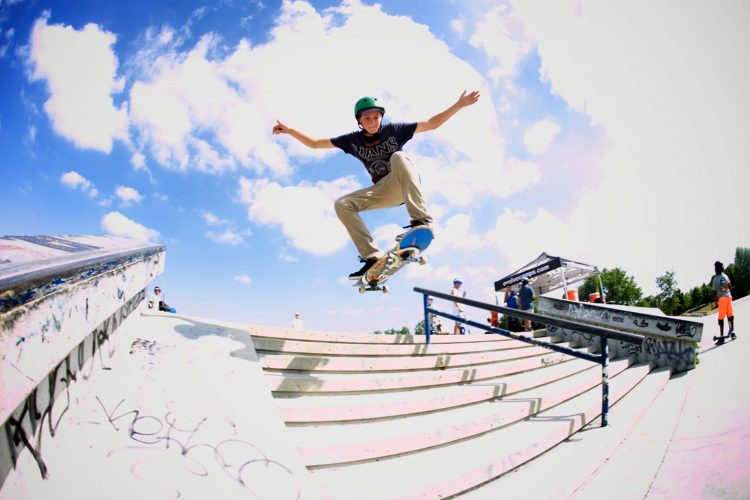