Here we go with another picture update. Enjoy the pictures from Evolve Snow Camps. If you choose to share any of these pictures on Instagram please tag @evolvecamps

Below are great photos of campers having fun and learning on the hill, along with group photos.

3 Snowboard Films To Get You Pumped For Winter

Summer is over, fall is here and before you know it, winter will be upon us! In the mean time, here are some snowboarding films that will get you psyched for the upcoming season.

The Burton team took ‘The B’ to another level with riders going bigger and better at each spot or obstacle. This films will take you from New Zealand to North America and Europe. Once you watch Keegan Valaika’ killer opening know you’re in for a epic journey! Other riders include: Jeremy Jones, Jussi Oksanen, Nicolas Müller, Frederik Kalbermatten, and Shaun White with appearances by many others.

Everybody knows and loves Canada’s golden boy and 2014 Olympic bronze medalist Mark McMorris. In his debut film ‘In Motion’ Mark and his crew will entertain you from start till finish as you’ll get to see a more adventurous side of him. He spent much of the 2015 season exploring the world and finding wicked spots to ride. In Motion also features Darcy Sharpe, Craig McMorris, Danny Davis, Nicolas Muller,Tor Lundstrom, Kevin Backstrom, Mikey Ciccarelli, Terje Haakonsen, Mikkel Bang, Mikey Rencz, Stale Sandbech, Scotty James, Ulrik Bardertscher, Werni Stock.

You know a film starring Travis Rice in it is going to be epic and ‘That’s it That’s All’ shows us just HOW epic it can be. You’ll be in awe of the beautiful sights and landscapes captured by a helicopter’s crane camera. The film also stars: Jake Blauvelt, Kyle Clancy, Terje Håkonsen, Bryan Iguchi, John Jackson, Jeremy Jones, Danny Kass, Scotty Lago, Mark Landvik, Pat Moore, Nicolas Müller and many more. Not only will it get you counting the days until the first snow fall but it will all also get you stoked for ‘The Fourth Phase’ coming out October 2nd, 2016.

Winter is coming! Here at Evolve we’ve been preparing for what’s to be the best season yet! To go along with that, we’ve created the ultimate playlist for you to listen to whether you’re on the bus up to camp or for when you hit the slopes. This playlist is a combination of tunes we enjoy, oldies, current hits, and songs from snowboard films. Check it out!

See you on the slopes! 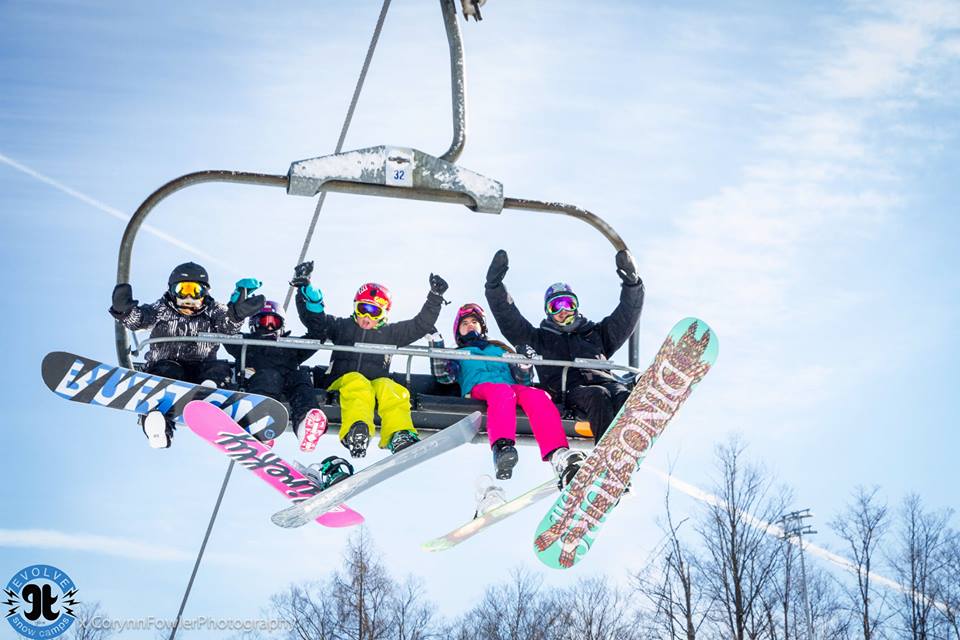 We’re Back at the Toronto Snow Show!

The 2016 Toronto Snow Show is happening once again for a full 4 days of fun, skiing, snowboarding, gear and good times. The even will be from October 13-16, 2016 at the International Centre Hall 5. It’s Canada’s largest ski/snowboard/travel show and from our past experiences being there, its always a wicked time! Evolve Camps will be there offering skate and scooter lessons for those wanting to learn a new skill or practice some tricks!

This is Canada’s biggest snowboard swap and also has amazing vendors if you want to buy some new gear for the upcoming season. This is a great opportunity for those have signed up or are planning on signing up for camp to get gear at a discounted rate!

The Burton Riglet Park is back for it’s 2nd year at the show and will be  going on right beside us! This is a great for young snowboarders to go through the movements and sensations of snowboarding. The Pro Am Rail Jam is also going down, so make sure to check it out, cheer on your favourite pro’s or sign up and be apart of the competition! The Toronto Snow Show is an event that’ll get you pumped for winter so you don’t want to miss out on it!

IF3 Montreal 2016 is 10 days away from starting. This time of the year is always a favourite for all of us at Evolve Snow Camp and Evolve Chile. This is the best place to catch all the new ski film releases from all of our favourite athletes and brands. Its also a good place to hang out at and meet the athletes we all look up to in the world of skiing.

There is always a ton of movies being showcased. One we are all looking forward to is is Canvas, which was produced by our Evolve Chile Coach Alexi Godbout. The film will feature  Stan Rey, JF Houle, Josh Daiek, Vincent Gagnier, Alex Beaulieu-Marchand, Dean Bercovich, Dana Flahr and Maxim Arsenault. With the support of its sponsors, Salomon, Whistler Blackomb and ForeCast Ski Magazine.

The great thing about the festival is that it is now available in various locations around the world, including Chile. Chile as many of you know is our home base for our endless winter sessions South of the Equator .

If you miss out on the Montreal  event, you can always hit them up in Chile, Japan, Amsterdam, London or Le Massif.